A fabulous review from Booklist!

I DON'T WANT TO BE A FROG

There is no denying it: frogs don’t have long ears, or wings, or curly tails. Nope. Little Frog is lacking these crucial qualifications for being a rabbit, an owl, or a pig. But he sure doesn’t want to be a frog. He is not into the slime aspect or the bug-eating. It’s left to his calm, rational dad to explain why he, a frog, cannot be, say, a pig. “Most of all because you’re a Frog. But also because you don’t have a curly tail or eat garbage.” When Frog protests, “I can eat garbage,” his dad replies, “Everyone says that until they eat garbage.” The young frog remains dissatisfied until a passing predator explains one unique benefit of

being a frog: frogs are the one thing he won’t eat, “too wet and slimy and full of bugs.” Lively digitally painted illustrations capture the interplay between the impulsive little frog and his patient dad. Silliness and deadpan humor combine into a hopping good story of being happy with who you are. — Paula Willey 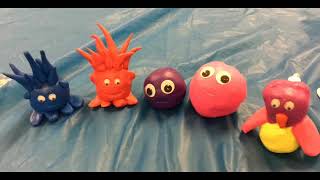 A Wonderful Review From Librarian's Quest!